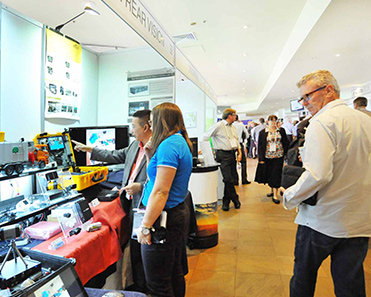 Operators featured in the video below are: 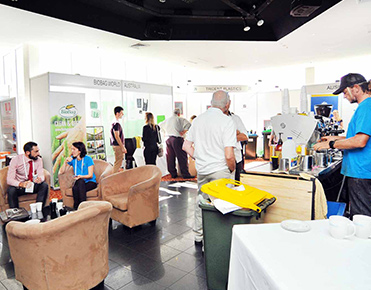 The first Coffs Harbour Waste Management Conference was held in September 1996 – while it was a good event, no one could predict that it would become the city’s largest annual business event and a “Poster Child” for conference longevity.

In 1996 two employees of Coffs Harbour Council, Greg Freeman and Jeff Green saw that management of waste was about to get a whole lot more complex. They worked as the Council’s environmental health surveyors and were about to go out to the market with tenders for waste management contracts for landfill management and garbage collection services.

Recycling was in its infancy with mainly bottle bags and newspaper collections undertaken by charities. Greenwaste was burnt at local landfills with the occasional shredding of timber material. While some drop-off centres and bottle banks were located around most communities, Chemical Cleanouts and Community Cleanups were yet to emerge into regional areas.

The two surveyors knew they needed latest market intelligence – but all they found was a gap in the market. There was no business-to-business event really addressing waste management and the needs of Regional Australia.

“ We thought at the time it would be a good idea to bring industry knowledge to us – after all we had a big venue (Opal Cove Resort), a great location and an enthusiastic boss," Mr Freeman recalled.1

Twenty years later and the Coffs Harbour Waste Management Conference has become a key annual event for the waste management industry, each year attracting more than 500 delegates, 90 presenters and 50 exhibitors. The program has expanded to include workshops and training sessions but its core focus remains unchanged: addressing challenges in waste management, exploring practical solutions and encouraging innovation.

Since its inception, the conference has been strongly supported by Coffs Harbour City Council, the NSW Environmental Protection Agency (EPA), Local Government NSW and the Waste Management Association of Australia (WMAA). It is convened by Impact Environmental Consulting, the company Greg Freeman established in 1997.

A key element in the initial success of the conference was the enthusiastic support from local government.

Coffs Harbour Council was quick to see the potential of the conference for both the local business events industry and also the emerging waste management sector. Local Government NSW also championed the event because of its role in providing a much-needed forum that addressed waste issues from the perspective of regional communities.

The context for the event became even more relevant when, just prior to the first conference, the NSW Government announced a target of 60% reduction in waste to landfill. This set in place waste reduction and recycling strategies that would mature over the following 20 years. It was also when waste management ceased to be seen as primarily a public health issue and began to be seen as an environmental health issue.

The inaugural conference attracted 240 mostly male delegates, predominantly from local councils – only 21 delegates (8%) were women. There were 20 presenters and a handful of industry suppliers. By 2016, attendance had grown to 575 delegates, 35% of whom were women. There were 90 presenters and around 50 trade exhibitors – evident of the growth in the industry and the breadth of its constituent base, which ranges from local councils and waste management suppliers, to scientists, environmentalists, government departments and international influencers.

Over the years, the Coffs Harbour Waste Management Conference has faced challenges that organisers have addressed by constantly evolving the program.

According to Greg Freeman, there are many factors that have made the Coffs Harbour Waste Management Conferences so successful. These include an innovative and relevant program, a well organised trade show– plus some highly creative networking opportunities and social events.

“Any analysis of the Coffs Harbour Waste Management Conference should also include what the networking and social events experiences have been. There have been many memorable Conference Dinners, with themes such as Bikers, Sporting, Bow Tie and Board Shorts, Survivor, Country, 70’s just to name a few.”

Coffs Harbour itself has proved to be crucial to the appeal of the conference and its capacity to attract repeat attendances and to engage new delegates. The city’s large range of resort venues and coastal retreats and well-developed events infrastructure is matched with a vibrant and creative community and beautiful coastal and hinterland areas.

It is a place where delegates can relax and get away from day-to-day work commitments; there is time to surf, swim or walk along the shoreline of some beautiful local beaches or just enjoy the ambience of this lovely coastal city.

Close by are opportunities to visit local galleries, shop at artisan markets, dine on fresh local seafood or drive through some spectacular World Heritage Areas.

The Coffs Harbour Waste Management Conference is an example of an event that was borne out of a regional and industry need, supported by local government throughout and developed in line with the growing and changing needs of the industry. Very few opportunities were wasted in terms of keeping the program relevant to an expanding delegate base and leveraging the unique attributes of the destination. Over twenty years the conference has contributed much to the industry and the region.